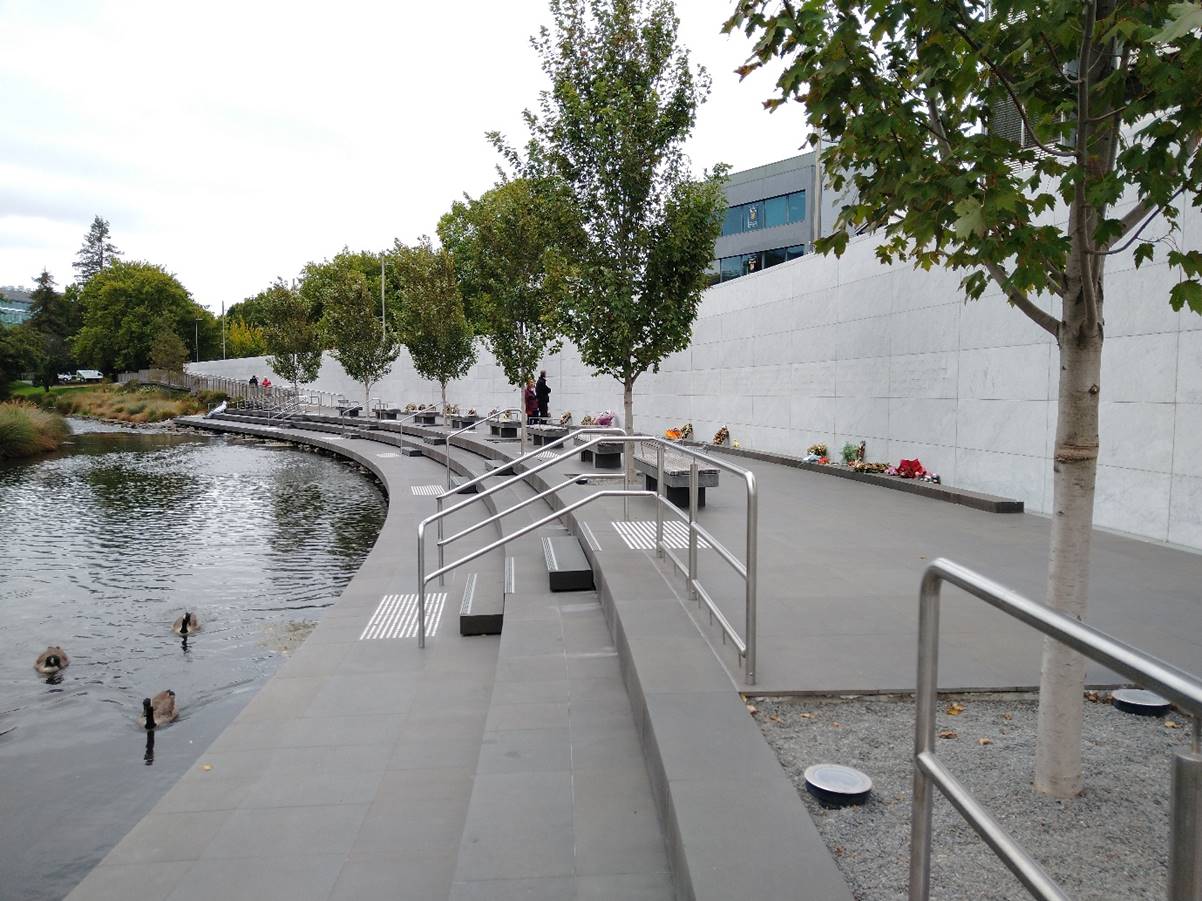 Today, Wednesday, I got the final coat of undercoat on this morning.  What a relief, now all remains is to sand it down and get a couple of topcoats on before Truce and I head out again.  The delights of Lyttelton are wearing a bit thin now and I need to move on.

Once my morning chores were finished, I hopped on a bus over to Christchurch for a day out.  It was cold today, a bone chilling southerly wind.

In 2011 Christchurch had a catastrophic earthquake, it marmalised the place and brought devastation to the city centre.  185 lives were lost.  I visited the remembrance wall to the earthquake victims, quite a moving place.

Parts of the city have been very well redeveloped with a sort of modern European flavour, trams, pedestrian only precincts and cafes.  Adjacent to this are seemingly abandoned broken buildings and fenced off bare sites.  It reminded me of when as a child we had bomb sites in the city, places that had been bombed in the second world war but not yet redeveloped.  They made great playgrounds for kids but probably were not safe.  I think it will take many years before the city is fully redeveloped.

One iconic reminder of the earthquake is the cathedral in the city centre.  It was badly damaged in the earthquake and unsafe to use.  A dispute has been running between those who want to restore the old cathedral and those who propose to knock it down and build a new modern cathedral.   I think the restoration group have won the day, even though it will be more costly than building a new structure.  Judging by the condition of the old cathedral there are many years work ahead.

After my walk around the city centre, I headed over to Hagley park, in the centre of the city.  There is a lake, golf club, tennis club, cricket ground, polo club, croquet club, botanical gardens and massive recreational spaces.  What an asset to have in the centre of a city.

I am not a gardener, but the botanical gardens are quite special.  For people that are into Herbaceous borders this is the place to be.

Next to the botanical gardens is the Christchurch museum.  I popped in, needed to get out of the cold and its free entry.  To my surprise I spent the rest of the day there.  The exhibits are varied, well presented, fantastic attention to detail, the work and expertise of the curators is outstanding.   I really enjoyed the museum.

I took the bus back to Lyttelton in what was rush hour, no big deal, just a few more cars on the road but no hold ups.  What a difference to the congestion of Auckland.

When I arrived back at Truce I had intended to give the last coat of undercoat a sand down in preparation for the topcoat.  Unfortunately, it was so cold today the paint hadn’t cured and was still tacky, I couldn’t sand it.  Hopefully, in the morning it will be dry.